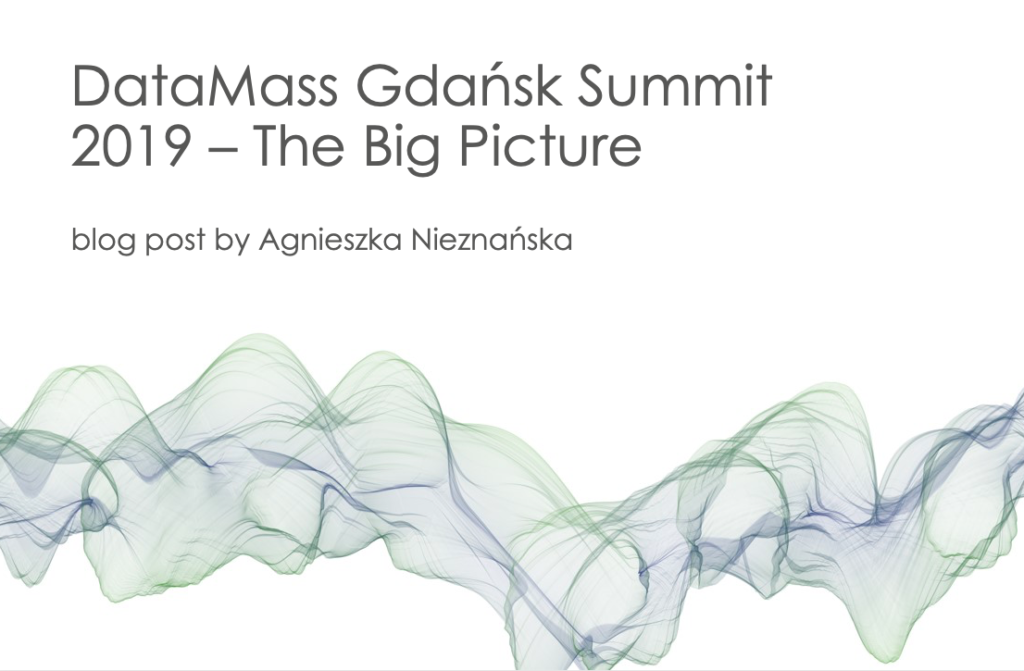 Over 200 attendees, 21 speakers, 19 presentations, 2 stages, all of these within 1 day – these are basic data about the DataMass Gdańsk Summit 2019 – the biggest conference in Northern Poland on Big Data and Artificial Intelligence.

On October 4th, 2019 I took part in the DataMass Gdańsk Summit – the third edition of the biggest Big Data conference in Northern Poland. The conference lasted one day and was held at the Gdansk Shipyard Center – a historic post-industrial building and a witness of the fall of Communism in Poland. It was roughly one kilometer from the Tryton Business House – the Kainos Polish office location. The conference was the culmination of the big-data meet-ups that have been organized regularly, throughout the year by the Data Engineering Group from Gdańsk.

Kainos – the silver sponsor of the conference

Big Data is a hot topic and Kainos has been actively following technological innovations in the Big Data and Artificial Intelligence (AI) world. Kainos was the silver sponsor of the event and had its conference stand. Over ten Kainos employees attended the conference including Mateusz Zając who was also a speaker and gave talk Smart Cities Data-Discovering true potential of IoT street observations with Azure. 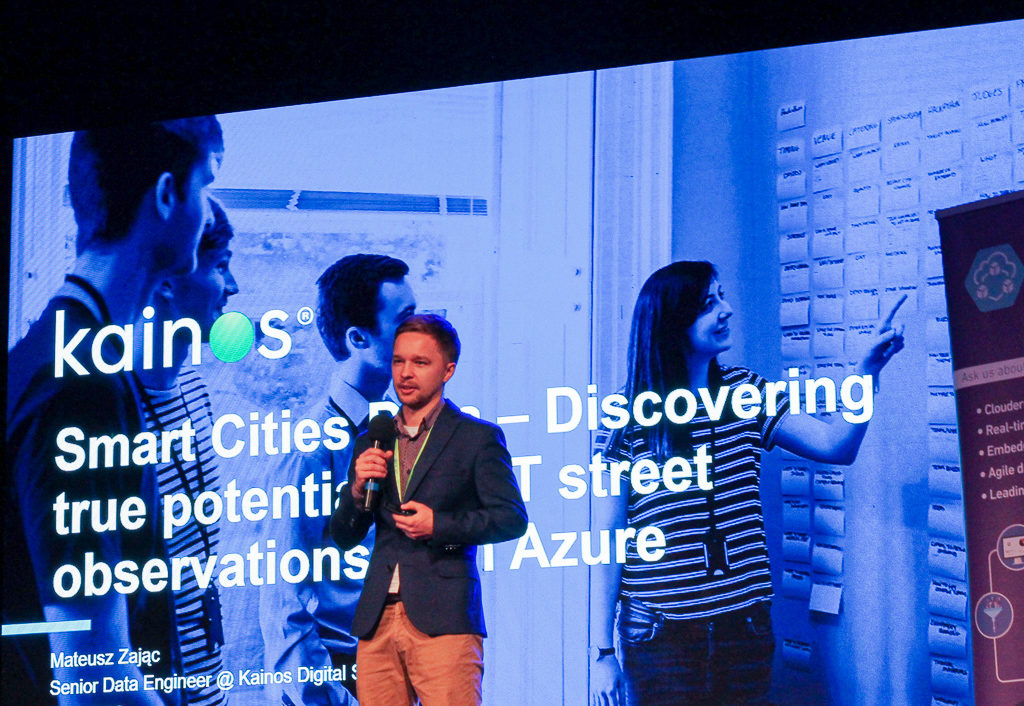 To take on more projects in Big Data, Kainos has already organized three editions of The Big Data Academy – a six-week training program on Big Data for everyone who would want to work as a Data Engineer. That, along with participating in and sponsoring such events should provide Kainos with sufficient knowledge within the company to succeed in the fast-changing IT world.

DataMass – a well-planned and organized event

The conference was very well planned and organized. There were two stages with presentations running in parallel. The first presentation began at 9:30 and the last one finished after 5 pm. The presenters were given 30-minute time slots. There were 10-minute coffee-breaks in between speeches and one one-hour lunch break. Those short breaks were great as they gave the opportunity to drink something, share thoughts and impressions with attendees and speakers and clear mind right before what was coming next.

Big Data, Big Responsibility was given by Jakub Szamałek – an award-winning author of crimes & thrillers and a CD Projekt RED screenwriter. The talk was a comprehensive introduction to the opportunities and threats posed by Big Data, with an emphasis on the latter. The speaker gave a few positive applications of Big Data, e.g. in healthcare and then focused on three types of risks that Big Data can bring:

The lecture concluded with the importance of ethics in Big Data. It was an energetic conference opening speech, run at the main stage. After that speech, the rest of the presentations ran in parallel on two stages.

DataMass – a variety of Big Data applications covered in other presentations

The other nine presentations I listened to covered a variety of Big Data applications. Adrian Boguszewski & Natalia Ziemba-Jankowska from Linux Polska talked about Convolutional Neural Network (CNN) that had been built and trained to support archivists in image labeling and face recognition in old photos from National Digital Archives. Piotr Rosiak from AirHelp shared the lessons learned from building a Data Science Team which grew up from 8 to 22 members within one year. Following that, Damian Rodziewicz from Appsilon gave an inspirational speech on deep learning in satellite imagery. He talked about new possibilities and applications in business that come from the analysis of such images (e.g. deforestation detection) and also described the architecture of one of Appsilon’s decision-support solutions. Ammar Akhtar from Final Rentals gave his thoughts on how technologies such as Big Data, AI and Blockchain can positively contribute to building democracy in emerging market economies (e.g. in Asian countries such as India or Pakistan) by helping in solving world problems such as domestic violence, poverty, corruption, climate change, deforestation and problems related to rural education, healthcare & nutrition. Konrad Słoniewski from Atos compared a few tools used in Big Data environments such as Spark, Dask, TensorFlor and Ray and also pointed out that it is good when Data Scientists not only have a broad knowledge of theory behind statistical models but also understand the distributed nature of Big Data environments developed by Data Engineers. 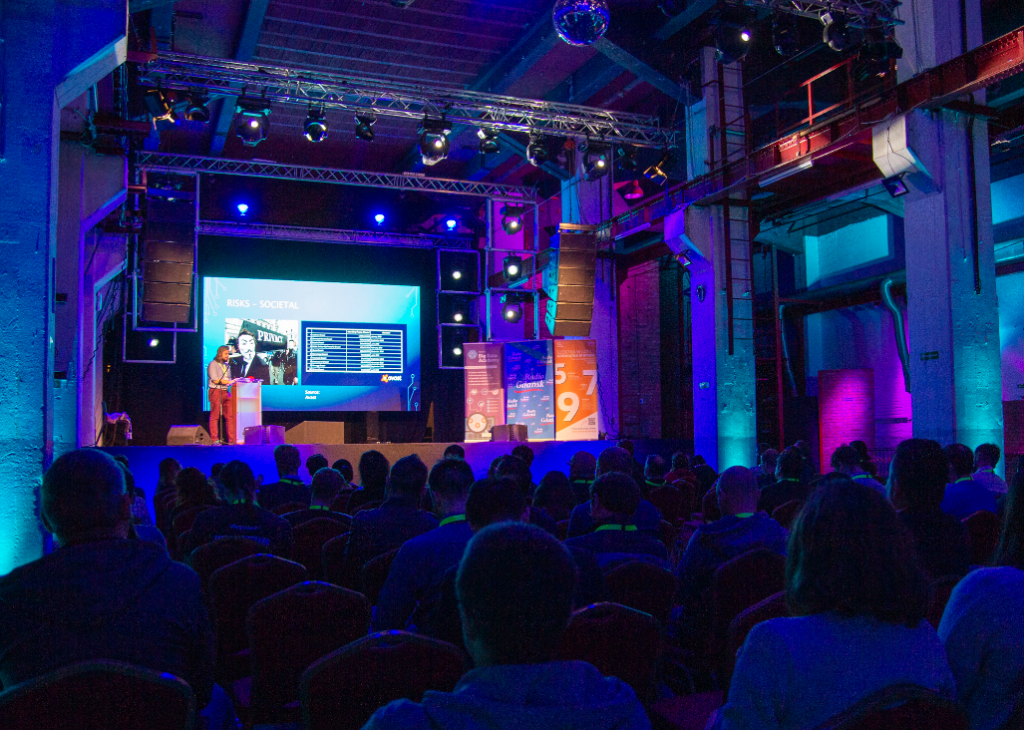 The next speaker, Kamil Folkert from 3Soft, discussed 3 most important factors which drive successful AI projects. Although AI is widely used in commercial, scientific and governmental projects with applications ranging from China’s Credit System Scoring to AI toothbrushes, it does not guarantee success. Following that, Tomasz Rutowski from Ellipsis Health talked about the outcomes of the research conducted on a machine learning model that was used to find the optimal length of patients’ speech input in order to classify depression. The main conclusion of this lecture was that the minimum and maximum time we should keep the patient talking (i.e. letting him/her answering one single question) was between 50 and 120 seconds. The penultimate presentation of the day was by Mateusz Zając from Kainos who talked about the technical challenges related to building the Smart City Data infrastructure. He came to some findings and conclusions while working as a Senior Data Engineer on one of the Kainos Big Data projects. The last speech of Michał Żyliński from Google discussed the future of machine learning and a large part of the speech was devoted to Federated Learning – a new AI model development that is distributed over millions of mobile devices.

My personal assessment of the conference is very positive. The atmosphere was inspirational, all speakers presented a high level of English, it was nice to listen to them, they respected the 30-minute time slots, presentations did not overlap. I highly recommend following all the news from the Big Data and Artificial Intelligence world – attending such a conference is a good opportunity to learn about the latest developments in these fields.

I hope this blog post will encourage people, also those who are not professionally connected with the Big Data industry, to attend the DataMass Summit next year.